Talia Agler Girls Shelter is a registered Charitable Children’s Institution under the Children Act, 2001. Established in January 2012 with funding from the Global Fund for Children, the Shelter offers solace to victims of human trafficking, sexual abuse, child labor, domestic violence and forced migration. TAGS takes in girls and young women from Kenya and those trafficked from across East African and other foreign nationals. Known simply as TAGS, it’s the Center for Domestic Training’s (CDTD) protection program that is dedicated to providing abused girls and young women with services necessary for their recovery and social reintegration using a 4R approach of: Reach, Rescue, Rehabilitate and Reintegrate. The shelter enjoy 24 hour security with guards and and electric fence. Shelter residents are provided with a bed, 3 meals per day and personal item as required during their stay.

TAGS is named in honour of Talia Agler, a young American girl who dedicated her life to empowering and improving the lives of Girl Domestic Workers in Nairobi during her internship in 2006. You can read more about Talia through the following Links: taliafaithagler.shutterfly.com http://www.taliafaithagler.shutterfly.com www.rabbiagler.net/talia-agler-zl http://www.rabbiagler.net/talia-agler-zl

The National Shelters Network was conceptualized in 2019 and began in February 2020. It is led by the Centre for Domestic Training and Development (CDTD), a women rights NGO that works to promote the rights of girls and women in domestic labour and other sectors in Kenya through advocacy, skills development, employment, education and protection since 2001. The Talia Agler Girls Shelter (TAGS) is CDTD’s protection arm which employs 4Rs – Reach, Rescue, Rehabilitate and Reintegrate in its work with girls and women Victims of Trafficking, GBV and other forms of rights violations. Having attended three World Conferences of Women’s Shelters (WCWS) as participants and presenters respectively, CDTD garnered learnings that enabled it to spearhead the network initiative to address emerging issues and challenges related to shelter provision and prevention of violence against women and children as a collective. To facilitate the network formation, CDTD embarked on finding existing and functional shelters through a baseline survey conducted between October 2019 and March 2020. A total of 27 shelters were initially mapped. Between March and June 2020, the network has further mapped 10 new shelters. The network has also lobbied for collaboration with the National Gender and Equality Commission (NGEC), the State Department for Gender (SDfG) and joined SDfG’s GBV Cluster Working Group and, has partnered with the Collaborative Centre for Gender and Development (CCGD)  and have been instrumental during the   shelters mapping. 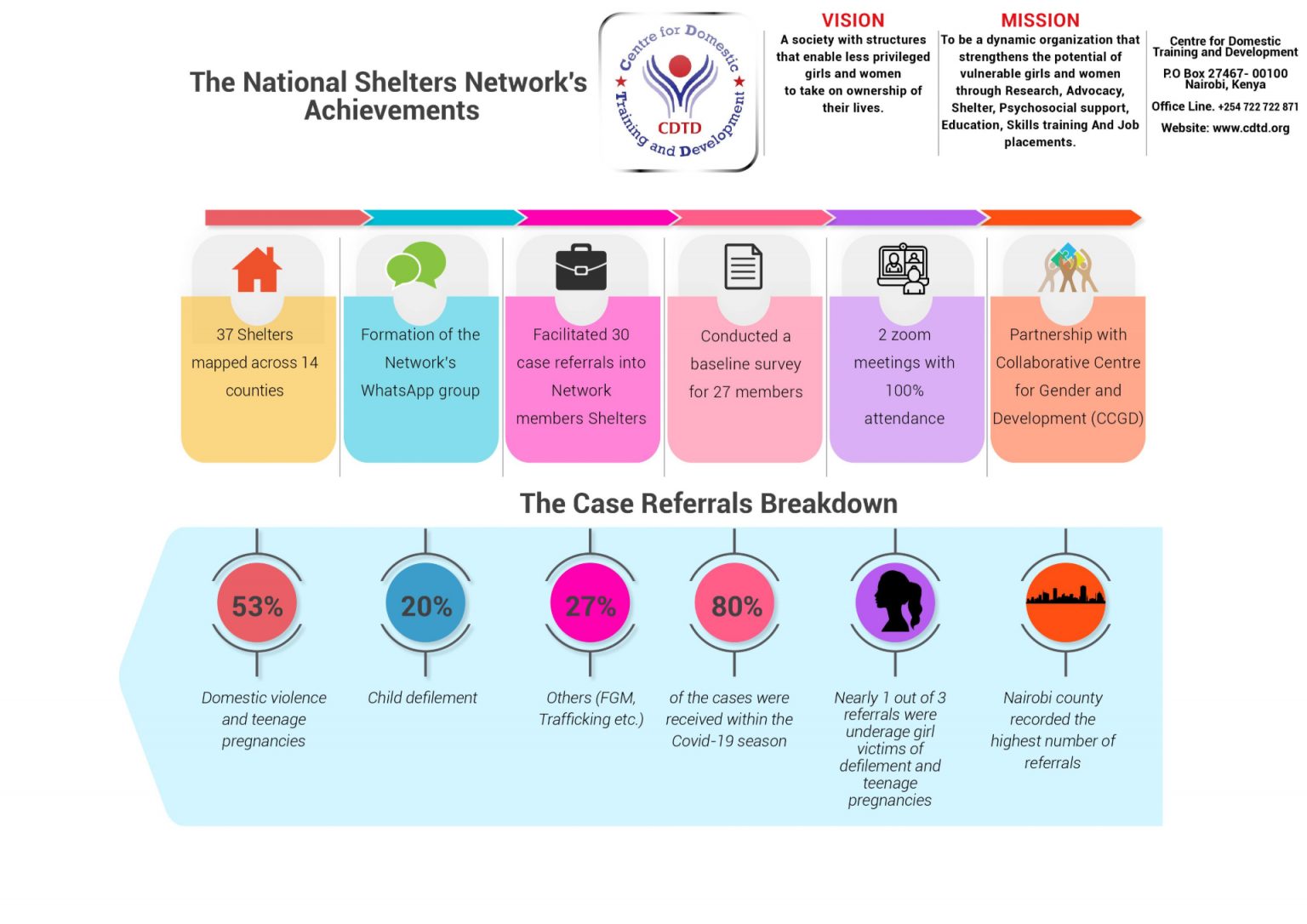 The Girls Hub Ke is a proposed safe space where victims and survivors of SGBV can access information, tools and services that help them heal and navigate through life. The Girls Hub is a multi-faceted space that explores both virtual and physical avenues to provide a much needed platform that addresses gender inequality and SGBV related issues from a survivor’s perspective. The platform also allows for the socio-economic empowerment of young women and girls in Kenya through amplifying their voice and capacity to proactively participate in the day to day activities of society. The hub is nested by the Centre for Domestic Training and Development (CDTD), an NGO that provides shelter and rescue services to domestic workers, victims of human trafficking and refugees in transit. Due to the nature of these cases, CDTD has had to expand its services to provide shelter and direct assistance to SGBV victims and survivors. CDTD launched the Talia Agler Girls Shelter (TAGS) as a direct response to the rapid increase in the number of GBV related cases reported to them by internal beneficiaries and external sources. This surge in the number of cases simply is a reflection of how rampant and widespread GBV is in Kenya today especially as a direct result of major structural weaknesses in our governance, morals and beliefs as a society.